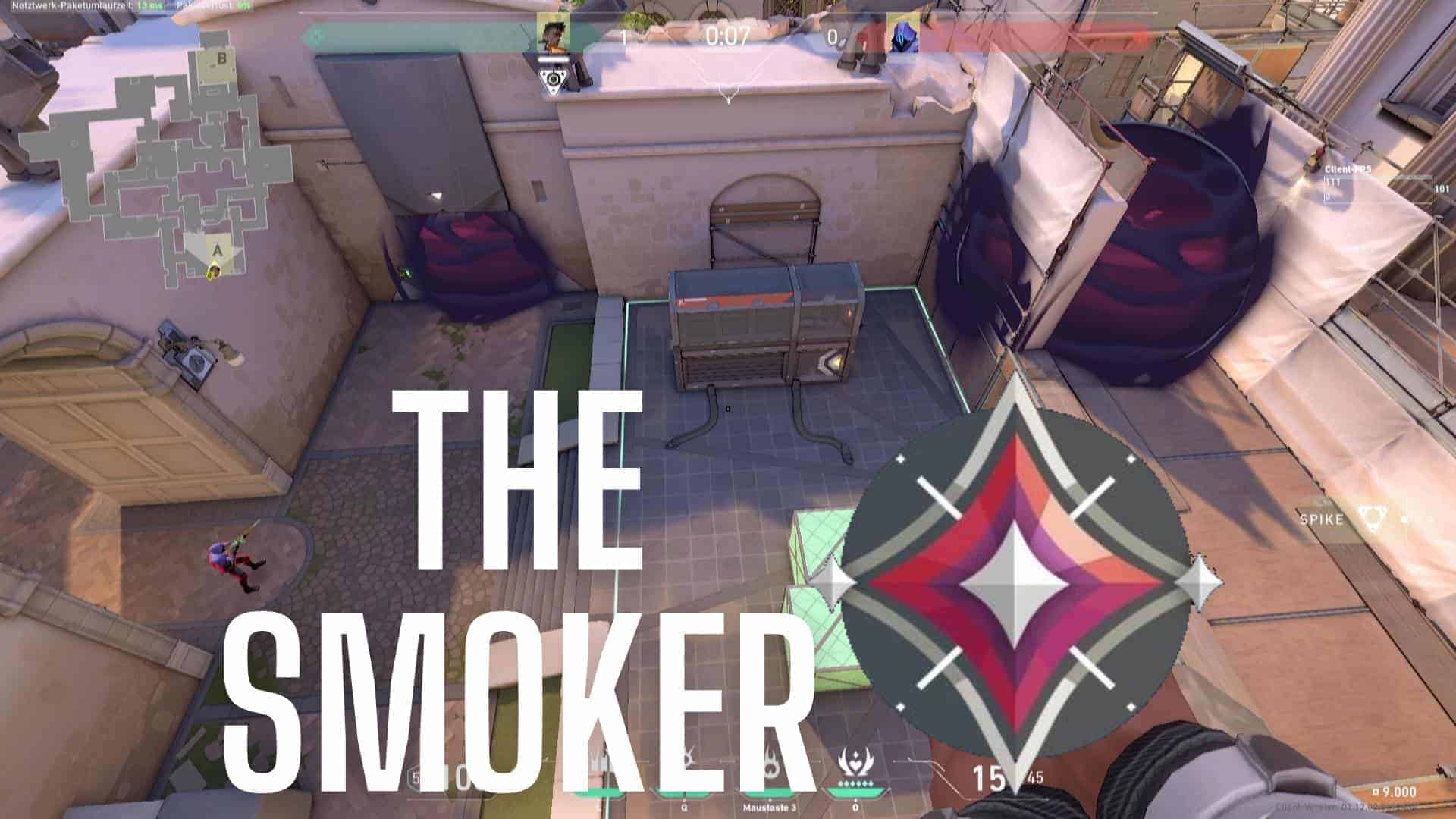 In this post, we show you how to use smokes effectively. Smokes are a crucial factor in Valorant. The higher the ELO you play in, the more essential smokes are for your team in Valorant. From Diamond ELO, good smokes are crucial to be successful. One of my main agents is Omen, the most frequently chosen smoker by pro-gamer lineups at the moment.

Smokes can block enemies while defending or attacking a bomb site, and they are useful for retakes. As defenders, blocking smokes handicap the attackers and take away their sight. In addition, during retakes, they reduce the possible shooting angles of the opponents. Other potential uses are fakes and individual plays.

How to Use Smokes Effectively to Block as an Attacker?

As an attacker, our primary goal is to use our smokes to block the reinforcements’ paths and prevent the enemies on the bomb spot from getting support quickly.

Therefore our smokes should be thrown flush with the spot accesses so that reinforcements cannot move on the spot already within the smoke or even get shot angles on our team.

On the one hand, this makes the retake more difficult, because the opponents do not gather well in the Smoke and can then simply flash out, for example, and on the other hand, a flush Smoke is much easier to cover, because with Smokes protruding into the spot, there is a danger that the opponent already moves behind the Smoke onto the spot.

Another option is to throw smokes at a spot entrance to gather all or part of the team in it and then explode onto the spot with a go using different abilities.

Especially in eco rounds, such tactics are often used to compensate for low firepower using the surprise effect.

However, I would recommend you choose this variant carefully and not use it too often because good opponents might smell the rat and fire into the smoke so that the round can be lost quickly without getting the chance to do any noticeable damage.

But if you do something like that as a variation, you can use such smokes in future rounds as a pure fake, but I will go into this in more detail in the rest of this article.

How to Use Smokes Effectively to Block as a Defender?

Now let’s look at it from the defender’s perspective.

Unlike on the attacking side, where smokes are often used as a start for the upcoming go to a spot, as a defender, you have to act much more spontaneously based on the information you have available (minimap or calls of the teammates).

The opponent usually takes the initiative, and since you can’t smoke everything all the time, you have to think carefully about what to do with your precious smokes. Especially if you play Brimstone and only have a maximum of 3 smokes available for the whole round, you should think twice.

In Valorant, few opponents push with 5 men on a spot at the beginning of the round. Still, at some point, the attackers are usually forced to do so by the expiring time or have put themselves in the appropriate position with entry frags that they commit themselves to a bomb spot.

As soon as the smoker (or his teammates) has recognized this or at least thinks that this spot is ready to get taken, his task is clear: He throws his smokes on the entrances to the bomb spot and tries to block the push or make it more difficult.

The attackers are deprived of the view of the defenders’ positions, which in turn makes it relatively easy for them, since they only have to cover the Smokes. Sounds simple, but the right timing for the Smokes is quite difficult.

Suppose the smoke comes only one second too late. In that case, the attackers may already be on the spot, and the effect may have fizzled out. Still, if you smoked too early, it may have been a fake by the opponent, and you have used up your smokes and can no longer block the actual push to another bomb place.

Of course, you are also dependent on the quality of the information provided by your teammates because you can’t be everywhere at once or look at the minimap all the time.

With good block smokes, which of course have to be thrown flush again, as described above, the defenders of the bomb place should be able to either stop the push entirely or at least do a lot of damage and thus facilitate the retake.

Good opposing teams usually spread out on the spot and outside the spot during the retake. Therefore, they will try to cover all possible entries to the bomb place that your team could use.

Besides, the opposing team or what’s left of them will try to build up crossfire on the entrances you are most likely to use.

When you start the retake (which should, of course, always be done together on command and not individually, as with many weak or mixed teams that don’t communicate), Smoker should try to eliminate these crossfire possibilities.

Often this merely means smoking specific entries to the bomb place again because some opponents often withdraw from the spot to make the game wider or to use certain after-plant lineups.

Depending on the information available, you can also be very creative here. The main point is to support your team to get to the spot in one piece because your opponent will know where you are coming from in most cases.

Most of the entrances to a bomb place are very narrow and therefore easy to defend, but it becomes logically much more difficult without the appropriate view.

Finally, it is always worth saving a smoke.  Either you smoke the spike directly to defuse it if you know exactly where the opponent is or fog the entry to the bomb place and make it harder for the opponent to defend the spike. This always puts him under pressure.

How to Use Smokes Effectively as Fakes?

As mentioned above, you can also use smokes as pure fakes. First of all, you must throw the same Smokes onto the same places you used in the other rounds. If I suddenly throw any smokes that I never do or that probably don’t make sense, good opponents will quickly realize that something is wrong.

On the other hand, correct fake smokes can decide entire rounds, as they bind opponents and prevent them from rotating quickly to our actual target, which leads to a clear superiority situation for us.

Omen is virtually predestined for this because he can throw his smokes over the entire playing field and, therefore, participate directly in the actual attack in contrast to Brimstone.

For example, it would be a good idea to let a player with appropriate abilities (e.g., Raze, Sova, Skye, etc.) fake an attack with his abilities. At the same time, fake smokes are used.

So the opponent must reckon at least with 2 attackers and cannot rotate to another bomb place. In the best case, he even causes a rotation to the spot where he is faked and thus weakens our actual target.

Simultaneously, with a slight delay, the target spot’s attack can be started with 4 players. The faking player retreats if possible and covers the back of the team.

How to Use Smokes for Individual Plays?

Finally, there are, of course, individual plays. With such plays, every smoker can let off steam, and there are many different smokes.

Anyone who plays a smoker permanently will find that as a smoker, you quickly develop a feeling for which smokes can help you out of difficult situations or really cause problems for the opponents.

Whether it’s a blocking Smoke that I stand in with the Bucky, throwing aggressive Smokes at Haven in the middle and pushing with the whole team as a defender, or dancing all over the bomb site as an omen through my Smokes, there are almost no limits. To explain all the possibilities here would probably take too long.

Individual plays require, above all, instinct and practice, like many other things in Valorant.

What else Makes a Good Smoker?

Now that you know what you can do with smokes, it is, of course, vital that you master the pure ability of smoking. Besides the smokes’ positioning, which has been described above in detail, you need to know how to stand as a Brimstone to throw your smokes.

Due to the limited range, this is not always easy.

Omen also has a range limit, affecting large maps, depending on the position.

In general, you have to learn the smokes’ lifespan to avoid suddenly being left without cover.

Finally, you should be able to use so-called one-way smokes, i.e., smokes in which you can see your opponent, his legs, or feet from your position, but the opponent usually cannot see you.

This smoke can be used mainly in defense and make it more difficult for the enemy to cross certain paths without damage.

These one-way smokes are available on all maps, and at least some of them are more than helpful and should at least be used as a variant.

But be careful; again, strong opponents can estimate where you would have to stand to use the one-way. So they may use this against you, for example, with a nice Ultimate by Sova on your position or similar.

We have covered the topic entirely with this article, “How to Counter One-Way Smokes in Valorant.“

This video shows you how to counter One-Way Smokes in under 60 seconds.

Playing a useful smoker for the team is undoubtedly not the easiest job. Still, you can significantly impact the game and influence its outcome more.

The smoker is one of the most critical roles in the team and could even be a role for a team’s in-game leader. The smoker has to use his abilities tactically and permanently to keep track of the situation anyway.